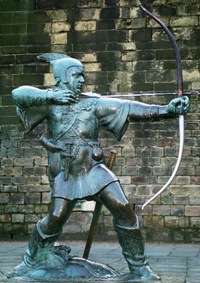 I tend to divide history into periods of time. It’s somewhat of an unconscious thing. I believe everyone does this. Probably, because our minds naturally do the same thing intuitively. Similar to how your operating system on your computer is programed to “logically” store bits of information in an orderly way. I have almost no idea of the actual process. I just know that it works.

But, in some ways we do this consciously, in order to keep track of the things that are important to us. Things that we like or dislike. We put the things in life that we like close at hand. And, the things we don’t like, we either dispose of them – a bonafide method of categorization – or put them somewhere out of the way.

When I think of human history, one of the somewhat unconscious dividers or markers I use are famous people. Heroes or villains. People that made a difference in the world they lived in at that time, whether that was for the good of humanity or to the detriment.

I saw a blog post a couple of days ago that made a point about the need for heroes. That when life becomes difficult, heroes arise. That an historical revival – a move of God – is close at hand.

Heroes with the largest impact on the world – greatest catalyst for good – were those that brought the kingdom of God in a way that transformed society into times of peace and productivity. Times of unity and diverse collaboration that produced exponential advances in Art and Science. The greatest advances in the history of mankind came with the advent of humble Spirit filled men and women with the courage to put everything at risk for righteousness.

I know, you thought I was going to talk about the military kind of heroes. In some ways I am. Many of those that brought change to society did so after violent military conflict. Evil has a tendency to not want to go quietly. Sometimes that is what is needed and it seems, it will always be that way.

Arrogant and maladjusted individuals – Nimrod, Nero, Qin Shi HUang, Herod, Attila, Stalin, Hitler – some who achieved great building projects and forced their nations forward at the expense of humanity are viewed by some as heroes. But, one of the greatest genocides to ravage earth occurred over the 500 years the western hemisphere was colonized. Much of this under the guise of “the name of God”. And, that cannot be attributed to any one individual from any one European nation. Rather that should be placed under the heading, man’s inhumanity towards man. Eugenic’s induced continental cleansing birthed by a deceived sense of superiority. This is the history of the America’s and it is viewed – still – by the victorious, as fulfillment of “Manifest Destiny”.

There are enlightened leaders that brought about longer lasting and more productive change without tyranny. Particularly here in the United States. But, even as great as the American Experiment has been. It could have been better. The ethnic cleansing of the indigenous population of the western hemisphere did not need to happen. There were examples from the very beginnings of productive collaboration and cohabitation between Europeans and Native Americans – the Natick People for one, the Cherokee Nation of the early 1800’s another.

Again, evil in the form of fear, greed, and ignorance eventually ended these kind of successes. Still the American experiment is better than the rest of what is out there. And, the genesis of this experiment is undeniably God Breathed. Regardless of how badly our ancestors mucked it up. There were men and women of all races and tribes that rose up and catalyzed their worlds, exhorted and inspired men and women through word and deed. Created light in times of darkness. Saved whole cities from anarchy. Saved whole cultures from blight and plague. Saved races from slavery. Freed continents from racial madmen.

So where are the heroes for today?

I heard a statement (not sure of the truth of it) attributed to our current President. That he believes that the Christian Foundations of our Nation are outdated and obsolete. That those that hang onto those concepts are to be treated as domestic terrorists for maintaining such fanatical beliefs. If this statement is truly his stance, there is no heroism in it.

So again, where are the heroes that will stand and fight for righteousness? Who will stand for moral purity, black and white understanding of truth versus falsehood and the consequences of a relative understanding of those concepts. True heroism that humbly brings in the presence of a Holy God that created all things. The historical Creator Father that taught our ancient grandfathers about the land He was giving them. The Holy Provider that calls us precious and gave His Son so that we can escape the prison of time and live in the eternal with Him.

When those people rise up, then transformation of our society will come. When the heroes come the people will follow. It has always been this way.

God, raise up the heroes. Those that look like Jesus and walk in His Power. Our world is tired of the false hope that does not save. The world is desperate for You. Desperate for the real power that exists only in You.

Could it be that you and I are the heroes? If not us then who? We who are filled with the Third Person of the Trinity?

Christianity is not designed for merely a “Self-Help” mechanism. It is a ticking time bomb of radical power unleashed to wipe the tears of a lost world away. It is passionate heart filled heavenly perspective that brings Truth into every aspect of culture, refining thought and producing wonders for the benefit of all. It is a never ending stream of inspiration and blessing just waiting to be tapped and given away.

Do you believe? Is this understanding woven into the core of your identity?